Visit PremierConcerts.com for concert tickets in Connecticut and Massachusetts
...

Visit PremierConcerts.com for concert tickets in Connecticut and Massachusetts

Premierconcerts.com has just relaunched their site will a new design and new features from WebSight Design. 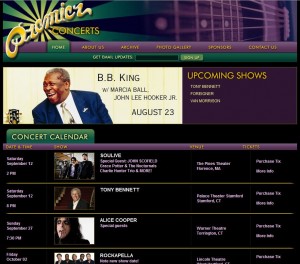 The new design includes a rotating banner feature on the newly redesigned homepage.  This banner cycles through images that are uploaded from the administrator and highlights featured upcoming shows.  With this relaunch, they have added a fabulous new photo gallery where you can browse through galleries of past show that they have represented. They have also added an archive feature to their site. In the archive, you can review all their past shows including information about headliners and supporting acts.

Premier Concerts produces and promotes concerts for amazing artists such as Van Morrison, Alice Cooper, and Tony Bennett. Premierconcerts.com is a one-stop-shop where you can find all the information you will need about concert venues, show information, and concert tickets in Connecticut and Massachusetts.

Premier Concerts was formed in January 2004 by veteran entertainment executive producer Peter Kauff and investor and concert promoter Keith Mahler.  Through the restoration of the Palace Theater in Waterbury, CT, they launched Premier Concerts to produce and promote concerts in Connecticut and Massachusetts.  Peter and Keith have been working in concert promotion and production for over 20 years and have represented some very popular artists including, George Carlin, REO Speedwagon, The Eagles, Led Zeppelin, The Who, and Jethro Tull.