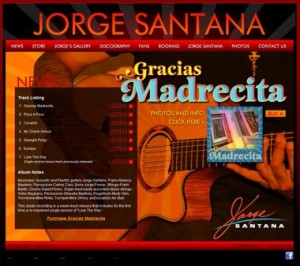 WebSight Design is proud to announce a fresh redesign for JorgeSantana.com. Jorge Santana, brother of the legendary Carlos Santana, decided to redesign his site to announce his new album, Gracias Madrecita. The launch date of the redesigned site was coordinated to coincide with the album's release date. To handle post release sales, the site includes a 3rd party online store through which Jorge's fans can purchase his new incredible songs! Specific elements included a big, colorful announcement of the new album on the home page and changes to the site-wide background image. Replacing an image of Jorge singing and playing guitar from his previous album, Here I Am, the new background depicts a stylized photo of the musician's hands playing the guitar. This background comes directly from the Gracias Madrecita CD insert artwork. The new website design also features two additional pages for Gracias Madrecita. One shows photos from the making and recording of the album, while the other provides MP3 song samples which can be played directly on the site. The site also gives users links to buy the album online. Finally, the redesign adds Gracias Madrecita to Jorge's discography database. Prominent new features on the site are the home page"”with its Gracias Madrecita theme and album artwork"”and the Gracias Madrecita pages added deeper into the site. The newest release of the site adds vibrant color and design elements into the existing site structure. By swapping out the subtle site-wide background image, visitors get a sense of change throughout the site. The new Gracias Madrecita graphic elements are a great color play and focal point for the site.