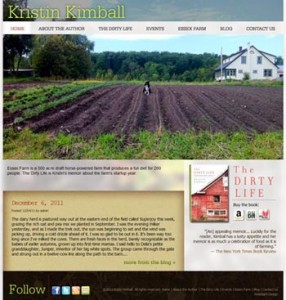 WebSight Design is proud to announce the launch of KristinKimball.com. The new site was created to publicize Kristin Kimball's adventure into the world of community supported agriculture (CSA) and Essex Farm. It features a stylized design with user experience at its core. Including a blog, events page, and information about Kristin Kimball, the website was created in support of Essex Farm and Kristin's book, The Dirty Life. Kristin grew up in central New York, graduated from Harvard, and moved to the Big Apple, New York City. She has worked at a literary agency, taught creative writing, and freelanced for magazines and travel guides. During her time as a journalist, she interviewed a man named Mark. Mark was a die-hard farmer who's passion for agriculture caused Kristin's interest to develop beyond that of her current profession. In 2004, Mark and Kristin founded Essex Farm "“ the world's first full-diet CSA. Since, Essex has flourished, and Kristin has been busy at work, both farming and writing. With the publication of The Dirty Life, Kimball has also written for O Magazine, Vogue, Gourmet Live, and a variety of other publications. In addition to the critical acclaim of her book, ranging from the New Yorker to the Minneapolis Star Tribune, Essex has been featured in magazines such as Food & Wine. With her new website design, Kristin will extend her online presence to match that of her book and farm's popularity.