Write by Design Site Live For the New Year
...

Write by Design Site Live For the New Year

Having your brand new website launched and go live is always exciting, and even more so for Write by Design owner Sally Clapper.  Last year in March, Sally decided she would like to have a website that (in her words) would act as a "digital business card" to both current and potential clients.  A friend of a friend recommended a website designer in Marin and a phone call later, the process began. Six months and a few thousand dollars later, Sally was shown a mock-up of her site and was aghast.  It was unusable. She fired the designer and came to WebSight Design, who confirmed that her instinct to move on was indeed a very good one. We scratched all previous work and immediately began working on a design to match the feeling Sally hoped the site would convey – reliable talent with a bit of pizazz and humor. Sally, as a content writer with an eye for design and online marketing, wanted the site to clearly depict the professional services her business offered yet with a playful flair. 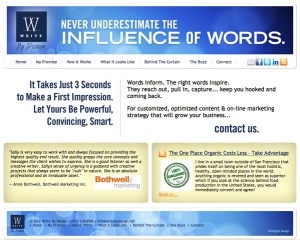 Unlike some new website owners, she did not need to be "found on the web" or have complicated functionalities but wanted to have a place to showcase her business and share her blog. Less than 45 hours of work later, just as the calendar switched to 2012, the creative and witty site went LIVE!  Sally was delighted, saying "All of you at WebSight Design perfectly captured the look and feel I was going for – from colors to layout to flashing my favorite quotes on the About Us. Thank you!"