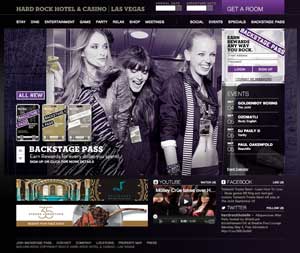 The WebSight Design team is elated and proud to announce the launch of one of our newly developed sites "“ The Hard Rock Hotel and Casino in Las Vegas. Working hand in hand with the design team Meat and Potatoes, this was a groundbreaking project for us in terms of collaboration. For one of the very first times, everybody in the company had a hand in the project"“ from programming, to design, to SEO, to hosting. Our team also effectively and efficiently coordinated with multiple 3rd parties throughout the process. As the biggest yii site that we have built so far, HardRockHotel.com boasts a number of notable features including:

The new site also solved the client's issue with fragmented data. Features like Backstage Pass connect directly to the Hard Rock Hotel's CRM rather than storing data on the site. Previously, the company would often be managing one user's information in multiple places due to the hotel, spa, casino, the Joint, etc. all having separate locations for data. A fun project to work on, we look forward to working together with the Hard Rock Hotel in the future. And, with bias, recommend that you stay there on your next trip to Vegas!