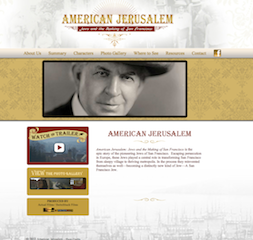 The site contains a comprehensive resources page where anyone interested in the film's subject matter can find extensive information. It offers beautiful historic archival photos and behind-the-scenes photo galleries of the movie-making process. The impetus for American Jerusalem grew out of the realization that American history scholars have virtually ignored the remarkable story of the pioneering Jews of San Francisco. This story is about their rise to prominence and how freed from discrimination, they reinvented themselves as a distinctly new kind of Jew: they weren't just American Jews, they were San Francisco Jews.

Their story which is now told through the film produced by Jackie Krentzman and website resonates far beyond California and is a tale of identity, tolerance, and the lure of the American West. It is the story of the American Dream. Visitors to the website can watch the trailer and read profiles of the film's characters - transformational San Francisco figures such as Levi Strauss and Adolph Sutro. The site also guides you on where to see the film and how to get more information and contact the film's creators. Connect with Facebook and social media through the site as well. American Jerusalem is a co-production of Actual Films and Switchback Films.  Learn more by visiting www.americanjerusalem.com.