Apple's website - developer.apple.com - provided for software developers who write software for the Mac OS and iOS platforms was hacked last Thursday. The site has plentiful resources for developers who write applications for iPhones, iPads, Mac Computers, and other Apple devices. A malicious attacker hacked into the site and attempted to gain access to information of the registered developers who utilize the site. Apple says that sensitive information was encrypted, however, they can not rule out that information such as names, email addresses, and/or mailing addresses were not obtainable by the hacker. In attempt to prevent another security breach and in an effort to keep a respectful relationship with programmers, Apple took down the site to completely rewire the system, updating server software, and rebuilding their entire database. On Sunday, Apple sent out the following email to registered developers, notifying them of the security breach. 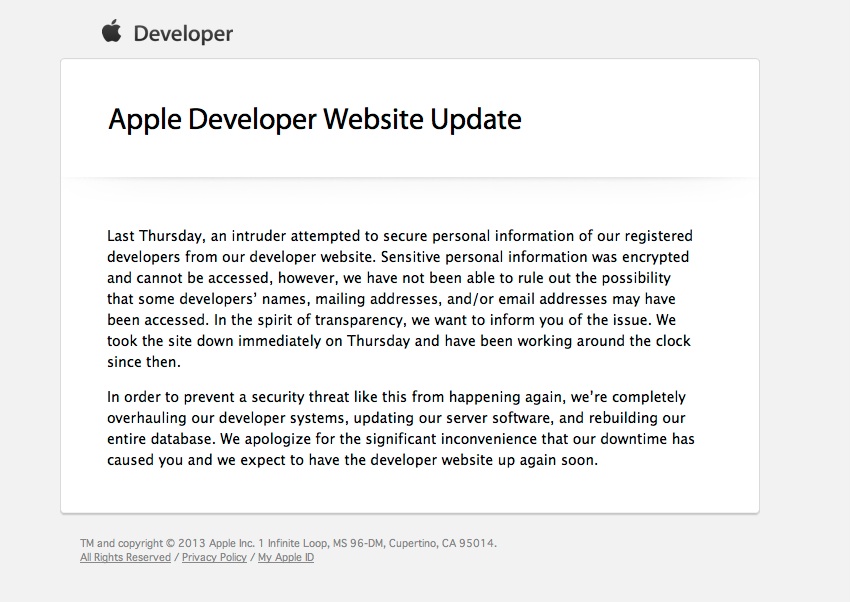 This attack is alarming because of Apple's reputation and the amount of trust that users put into Apple products. If an attacker is able to crack into the code of one Apple platform, it is questionable whether they will be able to crack into other platforms, such as iCloud and iTunes, both which contain very private details, including credit card information and bank account access. Also, Apple's applications are well known to be safe and malware free, the last thing they want is for the public to question the safeness of downloading Apple software. UPDATE::: As of July 27, Apple's Developer Website is partially restored. "We appreciate your patience as we work to bring our developer services back online," an update sent out in email to registered developers of the site reads. "Certificates, Identifiers & Profiles, software downloads, and other developer services are now available."