One of our oldest and largest clients, Pacific Union, has just been included in Inc's 5,000 list, which ranks the 5,000 fastest growing companies in the United States based on revenue growth. From 2009 to 2012 (years measured by Inc) Pacific Union had a growth rate of 90%, closing out 2012 with $94.2 million in revenue. Just after celebrating their fourth anniversary under current ownership, Pacific Union was awarded this news. Throughout the list, Pacific Union is the only Bay Area full-service real estate brokerage listed and has the fifth-largest 2012 revenue numbers out of the top 100 real estate firms included. This is not the only recognition Pacific Union has received lately. The firm was named the Third-Largest Residential Real Estate Firm in Northern California by San Francisco Business Times in March. In April RISMedia ranked PacUnion 18th on its Top Power Brokers List, and in May the firm was rated 3rd in the United States for average home sales price by REAL Trends. WebSight Design is proud to have Pacific Union as a client. The firm is a trusted, significant, and upstanding client. Contact us today to have your websites designed and developed by WSD. 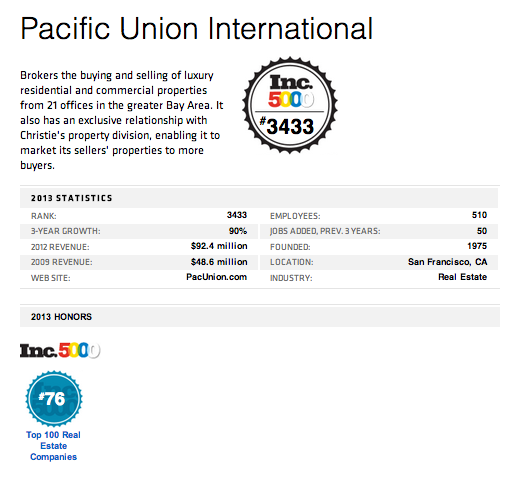